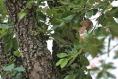 Saunderswood is a small tree of the family Leguminosae and is a native of Southern India and the Philippines. Sometimes called Red Sanders, Red Sandalwood or Sanderswood but not to be confused with the fragrant or True Sandalwoods (Santalum sp), which are now protected species and no longer available for sale.

The dark red heartwood of saunderswood is used for dyeing and produces a range of shades of browns. The wood is resinous and can produce two dyes, a red and a brown. The red dye is not soluble in water, but the brown one is.

Saunderswood is not a strong or easy dye to use but it is historically important to replicate recipes found in old dyers books and for re-enactment costumes.

What you need to start:-

1) Soaking and boiling the saunderswood
P 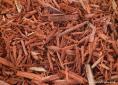 ut the saunderswood chips in a saucepan, cover with boiling water and leave overnight.

The following day, boil the chips in the water for two or three hours and leave at least overnight, if possible longer.

3) Dyeing the wool
Add 100 grams of wool mordanted with alum to the dye bath and simmer for an hour.

Take the wool out and add another 50 grams of wool for paler colours.

Note: In the past saunderswood was soaked in alcohol to extract a bright red colour, but this is no longer recommended, as alcohol is flammable. Furthermore, the colouring matter is precipitated when the alcoholic solution is diluted with water.